We quickly recognize this as a JWT, Json Web Token. I headed over to the jwt.io site to check it out. There we can paste the token in and get information about it’s contents pretty easily: 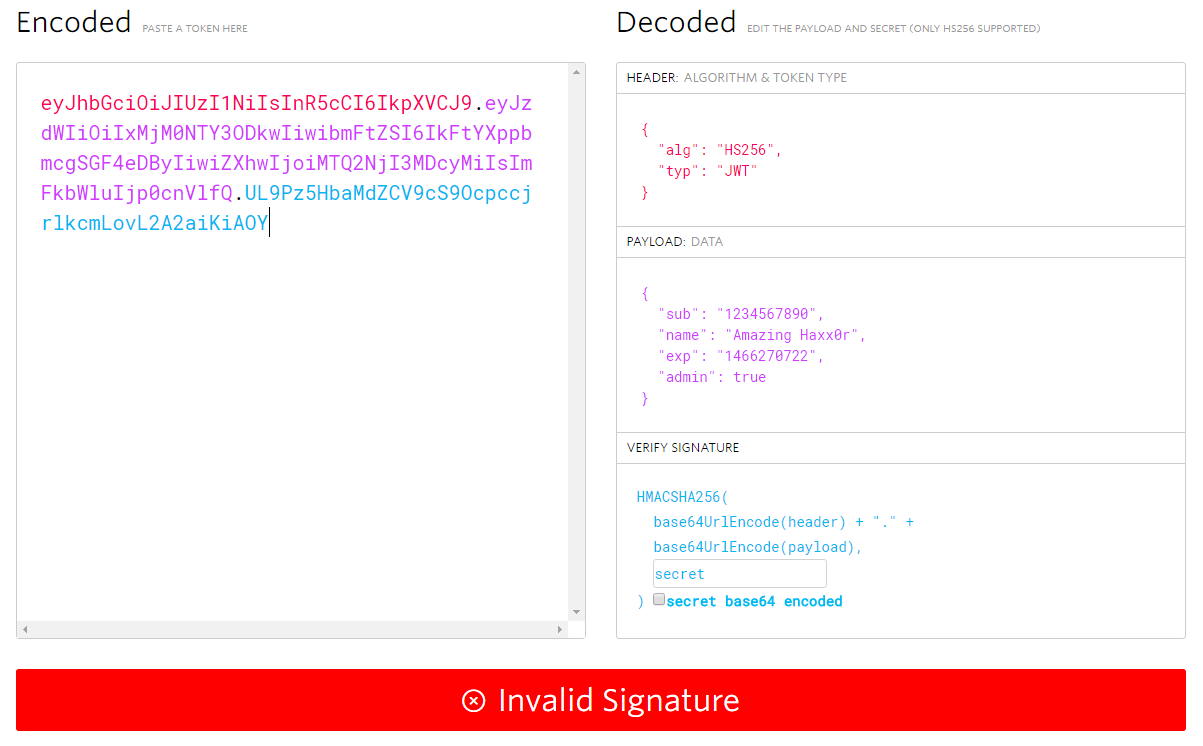 In this we see that we can’t validate the signature, this is expected because we don’t have the correct secret. We find, as expected the token has expired also. So the first thing we think is that we need to brute force the secret so we can generate our own JWT token with a future expiration date.

Using the JWT python library I build a quick attempt at a brute force system. Shortly after the challenge was announced a couple of hints were given.

So we know quite a lot about the secret already. I wrote some code using itertools.product to loop through every possible 7 character secret and see if the signature will decode without raising an exception. I run the script in parallel placing the single underscore character in each of the possible positions. This gave us no result after a few hours so we were barking up the wrong tree.

The next thing we looked at were encoded keys. We tried base64 encoding all posible secrets but again no result.

We then were stuck for a while, the challenge had not been solved by any teams yet. So could there be a fault in the challenge? It turns out there was. The challenge was using the plaintext flag (i.e. websecctf{……}) and assuming it was a base64 encoded string. Since “{“ and “}” are not valid in the standard base64 alphabet, the Javascript on JWT.io, where the challenge author had generated the challenge token behaved very oddly.

An example is if we have the example flag “websecctf{12_345}”. If we examine the Javascript on jwt.io and assume the checkbox shown above is ticked, the following operations are done:

So we need to examine what these two transforms are doing to the key. The first is window.b64utob64 which is short for “base64 url encoded to base64”. This in simple terms does a search and replace of all “” characters replacing them with “/” and all “-“ characters with “+” characters. The former is important because we know our secret has one “” in it.

The next transform takes the base64 key and returns a hex string of the bytes encoded. This function is slightly strange in that instead of raising an exception on a invalid character, it will instead return 0xff for the remainder of that encoded block.

When we run our test key, we get the following:

We see we lost much of the useless part of the secret here but we see the important data is still visible. To put this theory to the test we wrote a bruteforce algorithm using the pattern: websef////??/???. The following code shows our solution:

Which resulted in the following:

Nice. Bit strange challenge but we resolved it eventually.