Riscure RHme2 is finally over! What a marathon CTF. I actually spent a tonne of time on this CTF over the past few months, mainly because I had never looked at embedded hardware systems in the past. So I had to gain my skills from never having even used Arduino to performing side channel analysis and fault injection, reverse engineering 8 bit microcontroller binaries, and dealing with ever increasing lust for more and better hardware hacking tools!

If you don’t know what RHme2 is, it is a hardware based CTF run by Riscure. Around October 2016 Riscure put a call out to anyone interested in playing a hardware CTF to solve an online binary reverse engineering challenge. Solve the challenge and enter the competition and Riscure ship you a competition board to play on. The competition board is actually based on a clone of the Arduino NANO. So an 8bit, 16mhz ATMega328p MCU. Onboard each device though is a secret bootloader that decrypts firmware in flash memory so you can’t trivially reverse engineer all of the challenges. You’re main option is to attack them on the hardware. Sounds fun!

In this writeup I will discuss how I solved Secret Sauce, an “Other” category challenge which means just that it stood alone, not exactly fitting into any of the “Exploitation”, “RE”, “Crypto” or other categories on offer. The clue was:

So not super descriptive but one thing that stands out to me is the sentence:

Ok so we’re going to need to get more creative than simple brute forcing here. Let’s take a look at the challenge by flashing to the hardware.

Immediatly just upon flashing it I notice the size of the firmware in bytes. 12,672 bytes is very large for a simple password algorithm program. There’s gotta be something to this. Let’s connect via serial and check it out.

Ok one thing to note is it returns extremely fast and gives me infinite attempts on the password. This is interesting but we know to rule out brute force from the clue.

To be honest, I struggled for a few days to think of what vector to take. Until one day I decided to try typing a few more passwords in. As I did that I noticed that sometimes the response from the serial line was delayed. I later realized this is not related to the challenge, its just a result of connecting to a device over a USB Uart, sometimes packet processing is sluggish. But it got me thinking about timing attacks.

A timing attack is a type of side channel attack where you can learn something about the internals of a black box system by simply timing how long it takes to process an input you control. That’s cool because we control the input. But how do we time something at this scale? I already mentioned the processing is really fast.

By this time in my RHme2 journey my house had already collected a few new other microcontrollers. One was a very similar device, another clone of the Arduino NANO along with breadboards and associated gear. I had learned to code basic stuff for the Arduino so I thought it might be a good idea to perform the timing on an Arduino. Using the PC serial port might have worked, but we see later than having low microsecond amounts of resolution was necessary and I don’t know if a PC serial port would work.

I wired my Arduino together with the RHme2 board as such: 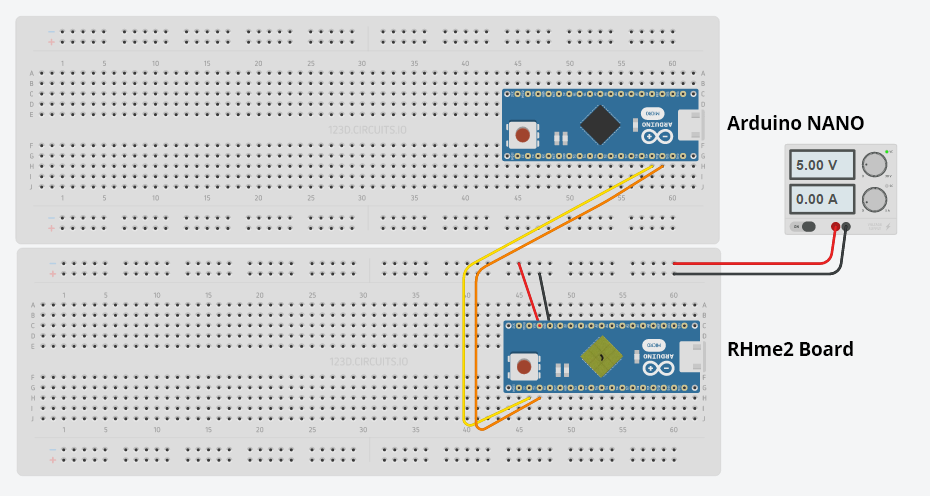 Which is simply powering the RHme2 board from an external 5v DC power supply while controling the serial input (RX, TX) GPIO pins from my second Arduino. I then wrote and flashed the following Arduino Sketch to my little attacking Arduino with the goal of timing the response of the RHme2 board to different length passwords.

When we attack the Arduino we get tab delimited time data. We have the Arduino repeat the experiment 100 times per password length so we can get a statistically interesting data set. It looks like this on the USB uart output:

So it seemes like our inputs take around 44,000 - 45,000 microseconds to process. Quite a long time in CPU terms. Since our collected data is large, I decide to inject it into Excel to analyse visually initially. Immediately I am surprised to see the graph: 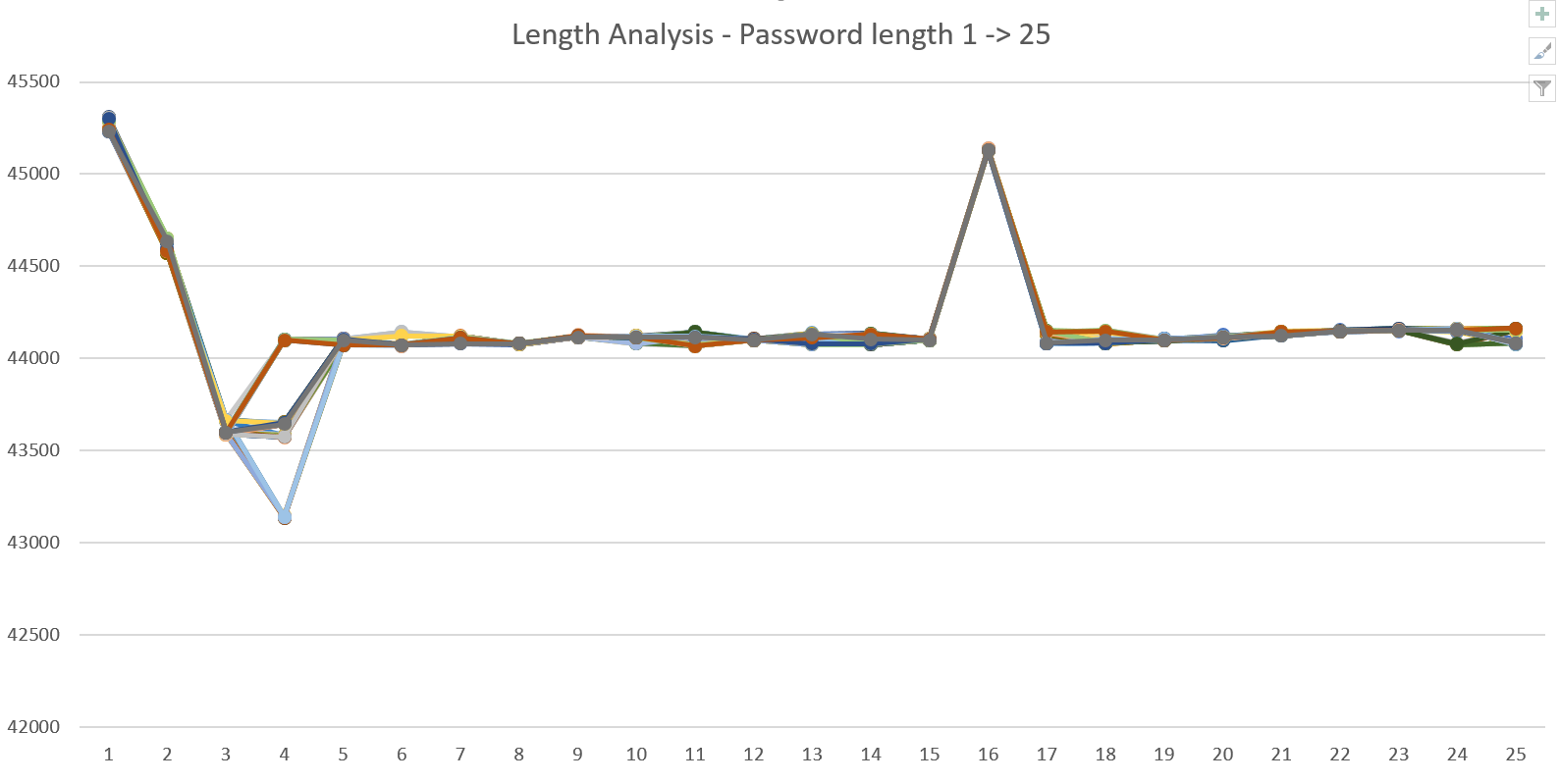 Firstly we see odd behavior at low lengths but a distinct peak at 16 bytes. The starkness of the peak gives me the impression that the password is probably 16 characters and the MCU is spending a lot more time analyzing such passwords. This also tells me that a password length check is probably occurring before any bytes of the password itself are checked. This means everything we send needs to be padded to 16 bytes. Good to know!

I modify the sketch to send padded passwords, mutating each byte and collecting data. I find similar results doing this to above. I use Excel for a few more bytes to confirm my methodology. Here’s an example for password byte 1, we see the peaks for the input byte “T”: 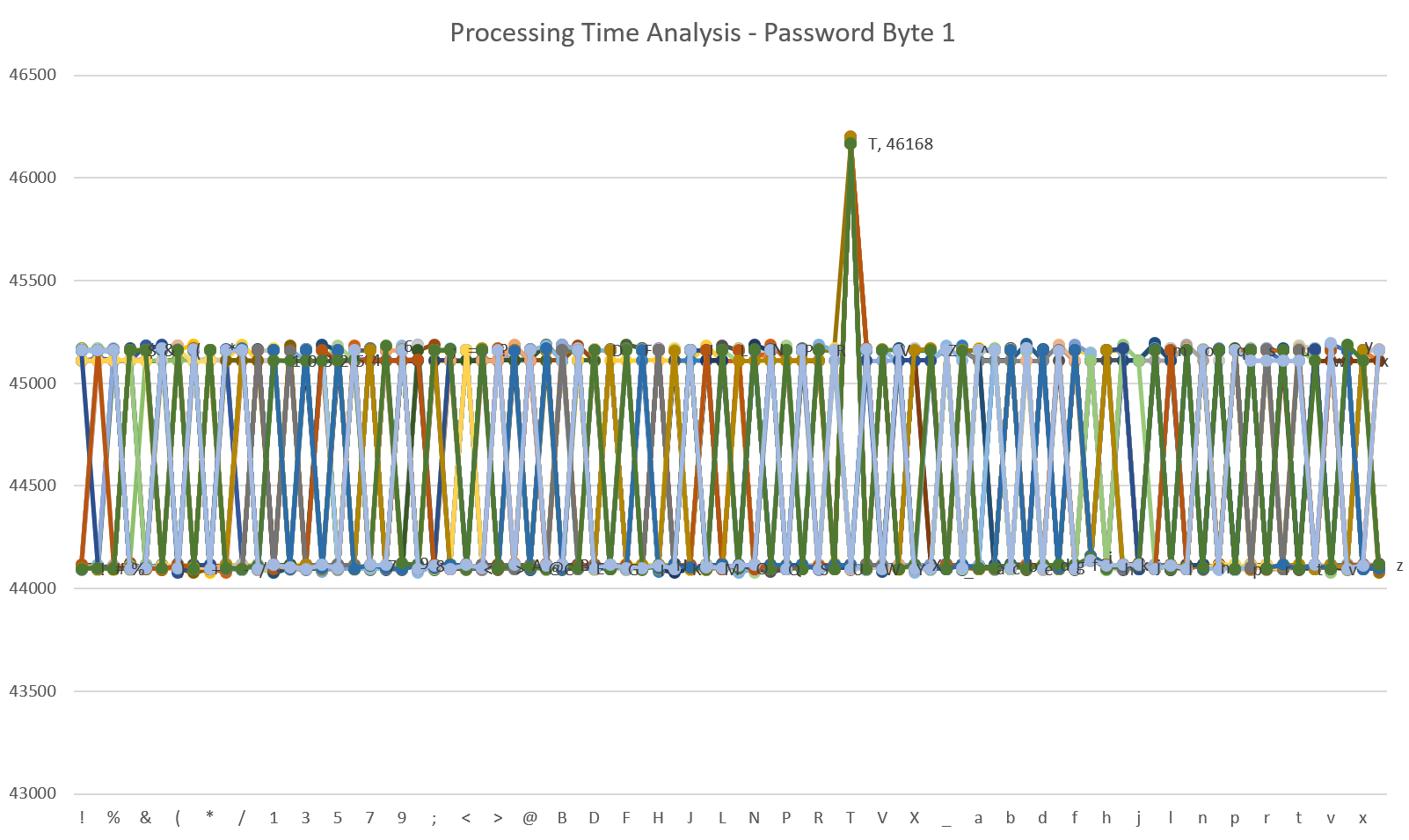 After some time I decide to instead write some Python code to perform the data analysis so I can give Excel a rest:

Which operates in the Sketch output data that looks like this:

After working on these data collection and analysis phases we were finally rewarded with the complete password: TImInG@ttAkw0rk Nice! Time for our flag right?

We had successfully beaten phase 1 of the challenge. We had recovered the password but now we’re faced with an unknown encryption system and even more unknown way to recover a flag. Let’s go on to Phase2.

Ok lets put our unknown encryption system hats on. What DO we know? Well lets try some chosen plaintexts and check the outputs. I’ll choose these:

Interesting. Both null inputs gave short outputs but both are different. This “True Random” nonce is likely a factor and is pretty annoying. The other strings seem to increase in blocks indicating some kind of block cipher or padding going on.

Let’s look into the True Random nonce. On Arduino there is not too many ways to generate “true” random data. One library is published with the goal of achieving this and is coincidentally named “True Random”. It’s published here: https://github.com/sirleech/TrueRandom

TrueRandom generates true random numbers on Arduino. They are different every time you start your program, and are truly unpredictable unlike the default Arduino random() function.

TrueRandom currently functions on the Arduino Diecimila, Duemilanove, 168 and 328 based Arduinos. It does not yet function on the Arduino Mega. TrueRandom uses Analog 0. Do not connect anything to this pin. These restrictions may be removed in future versions of this library.

How suspicious, what is it doing with Analog pin 0? The truth is, True Random is only able to product random numbers if the configured analog pin is left as a floating voltage. If this pin is pulled to some fixed value, say, ground, then there is no more randomness. Let’s try this idea out on the RHme2 board.

Trying A0, A1, and A2 I got no improvement. But grounding analog pin 3 (A3) gave me a significantly different behavior. Now when encrypting null plaintext my result is:

Consistent nonces with consistent ciphertext! Nice. Now we can try perhaps some more cipheranalysis that does not need to factor in a random nonce. The next thing I want to try is encrypting longer plaintexts to see the consistency of the output and how it looks. We noted before different length outputs in blocks of 16 . Let’s see what that is about?

Looking into this I found that encrypting 16 byte and 32 byte length plaintexts results in bumping the ciphertext output. So this appears to be a padded or a block cipher of some kind.

Next I decided to test re-encrypting the ciphertext. I use the following code for a few experiments:

Nice! So the algorithm here works forwards and backwards. So… XOR? Padded to 16 bytes? Probably because the XOR key is 16 bytes? Sounds likely. 16 bytes is a nice length for a flag too. Maybe the flag is the XOR key? Should be easy, we just need to encrypt 16 bytes of \x00 to find the key.

Next I focus on the fact that our output being 32 bytes for 16 input bytes is weird and still unexplained. The software seems to be appending some non-null string to our input before encrypting it. We can learn what it is by going back to our null encryption test. When we sent nothing earlier we got this result:

At this point I feel like I may have an idea of the algorithm in use here.

Since we can force the pt to be null we can remove it from the equation. We also know from before that we can run the algorithm both in forward and reverse then we should be able to recover our flag by simply:

We try it on the website and it’s right! Another challenge solved!