Here’s something new for my blog. I finally tackled a mobile challenge. In the past I basically ignored them or at most, decompiled them to Java source and did a little fiddling. No way, not anymore, time to tackle one!

There is no clue really, just the APK named illintentions.apk. We download and do all the normal APK style things which includes:

So let’s go through some of this as it’s a bit of a minefield for me. The first thing I found was that Kali was pretty crappy for mobile RE but fortunately I had recently found out about Santoku mobile forensics/RE Linux distribution. I already had Santoku in my VMWare so I fired that up and built an AVD (Android virtual device?) and started learning about debugging Android.

On Santoku the apktool worked well so I extracted the contents:

I browse the output and happened upon the strings.xml, there was a few suspect strings here:

I found that “flag” string is just a red-herring being the ROT13 version of Did you think it would be that easy?. Very funny! However I did make more use of the dev_name string which is short for Developer Name?

The third (5 point) challenge in the mobile category was Can you repo me?. This challenge prodded us to look for online repos where our mobile developer may have stashed the source code for this application. How might that help us? The obvious first step would be to search leetdev on Github and we’re in luck, there were only two results for that word and they both point us to this testApp repo. When we check the commit history we see this juicy detail. 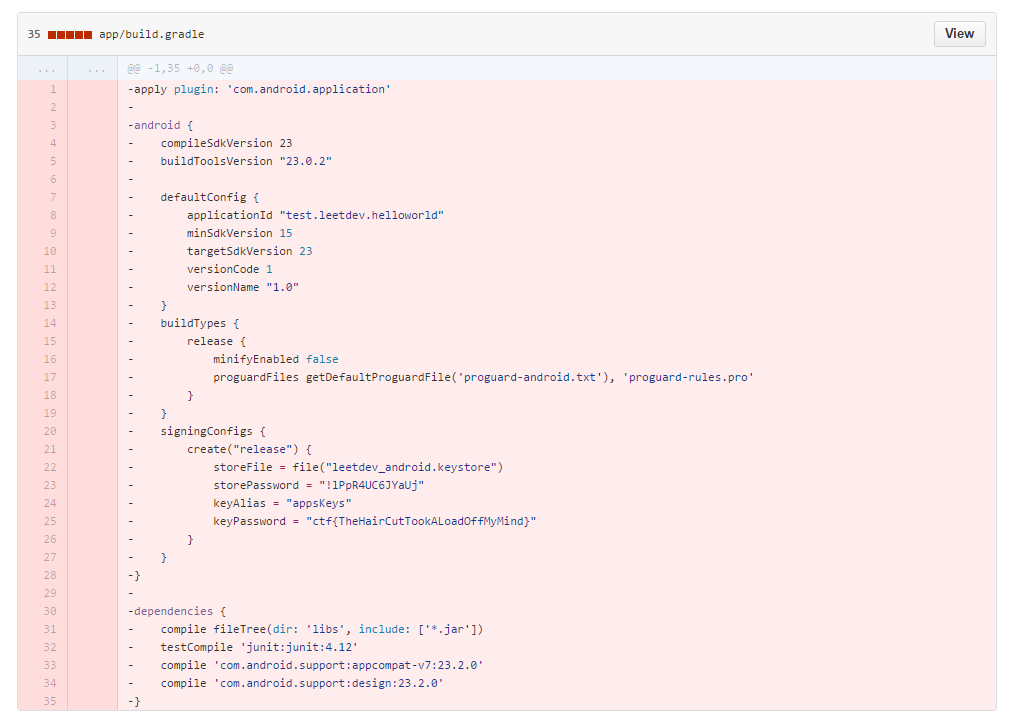 So firstly, yay 5 points (this is a 2 for 1 writeup guys!) and secondly, awesome now we have a keystore password. Browsing around the repo we find a keystore file. That might be useful later so I downloaded that too. Great!

Next we don’t see immediate use of anything else in the files we extracted so we move to reading the source code in the decompiler so we can see what we’re up against. First I notice the MainActivity does not do very much, just sets up something called a Broadcast Receiver listening for an Intent called com.ctf.INCOMING_INTENT.

I guess now we know where the name “Ill Intentions” comes from. Sweet. So what is a broadcast? It’s a way for apps to communicate to each other or even between activities of the same application. When they want to communicate that they want to do something they “Broadcast” their “Intent” to do it. Then other apps/activities that are expecting to receive such “intents” can do something with that information. Intents can also carry data between applications. These data components are called “extras”. Sorry Android people if I murdered this explanation. I just made it up based on my experience over the course of 1 day.

So what does our APK do once it receives a broadcast intent? It uses the Send_to_Activity class to decide what to do:

In this class we take the Intent as an argument and then extract the “extras” from the intent. In this case its a “String” extra with the label msg. String extras are key value pairs so there are 3 valid key/value pairs for this application:

Each one of these will start an activity with the same name. Let’s look at one:

This activity sets up a large button which, when clicked, extracts some of the strings from the strings.xml and finally builds a new intent of it’s own. This new intent has a string “extras” component of it’s own which is the return value of a Java native (JNI) function called orThat.

This JNI component is a C++ shared library that is compiled and shipped inside the APK in the form of this libhello-jni.so file. The challenge authors thankfully shipped versions of this shared libraries for many platforms including ARM and x86. I used IDA Pro to examine this shared library but found that it wasn’t a necessary step so I won’t detail my findings here.

Anyway, once it builds the intent it goes ahead and broadcasts it. There’s a catch though. It only broadcast’s this intent to applications that share the custom permission ctf.permission._MSG.

Wow, still with us? Great! Sounds easy right, here was my plan of attack:

Suffice to say I didn’t get pancakes very quickly.

Firstly, I started my virtual android device and when it was running I installed the illintentions.apk:

Next I start the application and send it a broadcast intent of the correct type. I found the following adb command can help us run the shell command line on the Android device that can spam this for us:

On the Android VM’s screen, when I broadcast this intent, I see it changes like this:

The center of the screen is a giant button, so I click it but I get nothing. Not sure what I expected. I search around for a while looking into “how to receive broadcasts on Android” but I find very little except tutorials on how to build one. After some hair pulling I give up and decide to do exactly that except I cheated and just downloaded one someone else had already built. I used this project and placed it into Android studio. I made the following modifications so that it would maybe work:

In MainActivity I changed the ACTIONx strings to capture the relevant Intents:

I configured the MyReceiver class to extract the “extras” from the received intents and log them to the Android log:

Finally I told Android that I wanted to use the permission ctf.permission._MSG by adding this link to my AndroidManifest.xml:

I built the APK and installed what is sort of “my first APK”. I ran my app, ran the “Ill Intentions” app, sent my broadcast and checked the logs:

Nothing! Bah! What’s wrong? I check the logs for ideas and find this:

Permissions Errors?? But I was sure I gave it the correct permission? I look into it in more detail. Permissions an app use or create are defined in AndroidManifest.xml. Ill Intentions defines these:

Hang on, what’s an android protectionLevel and what is the implication of it being set to “signature”. A short google later it dawns on me what I’ve been forgetting so far:

Thinking back to the 5 pointer from earlier, I realise we have everything we need to sign our APK as “Leetdev”. So I rebuild my APK using the leetdev_android.keystore we found earlier with the password provided in the old commit we saw earlier.

I repeat the steps from before but this time I see this in the logs:

Woohoo, very satisfying to tackle this as my first serious mobile CTF solution.

Thanks for reading all and thanks to Google for putting on this shindig.